This group are really working hard on their link with a local homeless shelter and planning more help in the future by opening up their ecclesial hall for music sessions and funding several projects run by the shelter such as breakfasts, literacy, vegetable growing and more. Here is part of Karens report:

Sian was delighted about the suggestion of donating rucksacks to their clients as they often have all their possessions in a bin liner.  She gave me a list of useful items to put in them and I ordered 20 sacks from COG. These were filled with woolly hats (knitted by our members and friends), gloves, socks, thermos flasks, snack bars, toiletry bags with; shampoo/shower gel, toothpaste and brush, flannel, brush/comb and deodorant. Two supermarkets donating gift vouchers of £10 each and Sainsburys donating two thermos flasks plus around 10 shower gels.The rucksacks were delivered to Pathways on the 14 December and a surplus of shampoo/shower gels and woolly hats were taken to Grace Chapel in the Market Square where homeless people are able to take a shower.

Why not follow their example and approach your local shelter and ask the simple question ( one used by Jesus himself) - "HOW CAN WE HELP?" Local churches amd street teams are crucial to the homeless and there is great opportunities to help, especially during the colder months when their lives are particularly hard.I volunteer on a street team and the resource we need is people to call on for sandwiches and home baked cake to take out- why not hold a baking day at the hall and donate to your local homeless? 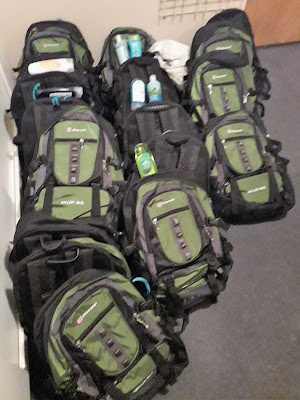